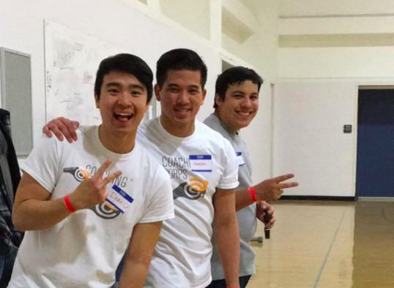 A Coaching Corps Ambassador is a leader that most embodies the Coaching Corps mission and goes above and beyond to accomplish that mission. Ivan San Pedro started this right off the bat.

As the new president of the California State University, Northridge chapter, Ivan stepped up and made it a priority to meet his fellow leaders before our chapter retreat to begin what would become CSUN’s most successful year ever.

In his role as president, Ivan attended every department meeting with the Recreation Director, Intramural Coordinator, and the Housing Coordinator and soon became Coaching Corps’ liaison for these departments.

“Ivan is the epitome of a great support system,” said Priya Sodha, Regional Program Manager for Los Angeles, “Every check-in we have, Ivan is always asking, ‘How many more kids need a coach?’” Through his newly mastered delegation skills, Ivan and his team have been in contact with coaches throughout the season to ensure each open coach spot was filled.

Ivan is also a coach! He started a volleyball team for two of our Northridge partners, the YMCA and Northridge Recreation. Ivan and Team Captain Samantha Hendry meet up every week to plan out each practice for their all-girls volleyball team.

In an act of true leadership, Ivan has decided to step down as CSUN’s active president in order mentor a new chapter president. His sensitivity about Coaching Corps’ legacy at CSUN and our mission is what makes Ivan such a great Ambassador to the Northridge community.

Interested in joining Ivan in the movement to make a difference through sport. Join our team.

Your support means a child has a chance to work with a consistent mentor that is invested in his or her well-being. Help us provide a trained coach to kids that are waiting for a chance to play.