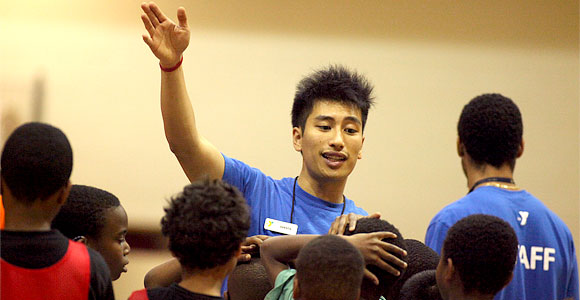 Team-Up for Youth is rounding the corner on ten amazing years, more convinced than ever that sports can be the vehicle of transformative change for girls and boys in low-income communities. In an economy that widens every gap between kids on opposite ends of the economic spectrum, this work has never been more urgent.

To tighten the focus on our core work, we are retiring the name “Team-Up for Youth.” The team T-shirt now reads “Coaching Corps,” a deeply satisfying acknowledgment that this vibrant program has become the organizing force of all our work. The new name leaves no doubt about our agent of change.

It’s the coach
Being on a team doesn’t change a kid’s life – that comes from having a great coach. Youth sports offer a thicket of teachable moments. But it’s the coach who seizes the opportunities to nourish a child’s physical, academic and emotional development. How do we know? Research in child development confirms it. We heard it loud and clear in our national poll of parents. Most important, we see it in the game face of every player.

Like so many game changers, the inspiration for Coaching Corps was hiding in plain sight. Team-Up for Youth’s approach to coach training has always set us apart. Training is our special sauce. But not even that can boost the capacity of organizations that are losing staff to budget cuts. More than once, program directors said, “We love your training. Too bad we don’t have a coaching staff to take advantage of it.” Independently, several of our grantees tried to drum up volunteer coaches through college sports departments and community service centers. But they just didn’t have the time or resources to wade into a campus and cultivate the required relationships.

The best vehicle for the original mission
The intersecting passions of three foundations sparked Team-Up for Youth’s start in 2002. The Evelyn and Walter Haas, Jr. Foundation, the San Francisco Foundation, and Robert Wood Johnson Foundation envisioned an intermediary organization that could improve the health and youth development outcomes of underserved kids by eliminating the economic and gender barriers to their participation in great sports programs.

Team-Up for Youth’s early strategies focused on grant-making, professional development, and technical assistance for after-school sports programs. The approach quickly gained traction. Our innovative training and technical assistance earned a nation-wide reputation for excellence, and we had no shortage of worthy grantees. Increasingly, though, grant-making felt like a stop-gap measure with an impact that fell short of what California’s most vulnerable kids needed. Coaching Corps, we recognized, had the power to deliver the biggest blow to disparities in sports participation between girls and boys, and between kids from affluent and low-income families. So we moved our grant-making resources to expanding Coaching Corps.

From an organization to a movement
Everyone agrees: we have to get this terrific program to more kids. With that in mind, we designed a scale-up model that would expand Coaching Corps efficiently and sustainably. The best mechanism of growth, we decided, was a network of student-run Coaching Corps chapters on college campuses. With confidence in the design, we set the ambitious goal of training 25,000 coaches and serving 500,000 kids over a six year time period.

Nine campus chapters now connect our coaches to girls and boys who have few opportunities to play hard, get fit, and develop life skills like persistence and teamwork. On each campus, chapter members and their student leaders are coming up with terrific ideas about creating buzz for the program and inspiring their peers to join.

Coaching Corps has taken on a life of its own, and it’s acting more like a national movement than an organization. A college student from Atlanta recently called us. He heard about Coaching Corps from a friend at UC Berkeley, and so he started a chapter at Emory University. This is one among many examples of contagious enthusiasm for Coaching Corps. The formula resonates with everyone: Excellent training + Committed and consistent adults as coaches and role models = Lasting change for kids in low-income communities who can’t wait to get in the game.

It will take more than an organization or institutional ideology to address the health, educational and social crisis children in underserved and under-resourced communities are facing.  Rather, it will take a movement; a corps of committed individuals across the country being a voice for the children, giving up their Saturdays and evenings to serve them as coaches and mentors, being committed enough to advocate for policies that reduce educational and economic disparities between kids based on where they grew up, recruiting their friends to join the movement and a network of like-minded individuals operating in concert to ensure that all kids, regardless of demographics, race or income have the opportunity to be physically active, have access to a caring and trained coach as a role-model and teacher and gain benefits like team work, confidence and academic success that playing sports provides.

This is our vision for Coaching Corps.  This is the journey we have embarked on.  We hope you will walk it with us as we shape a new future for our children; one where they are all healthy, fit and ready to learn.