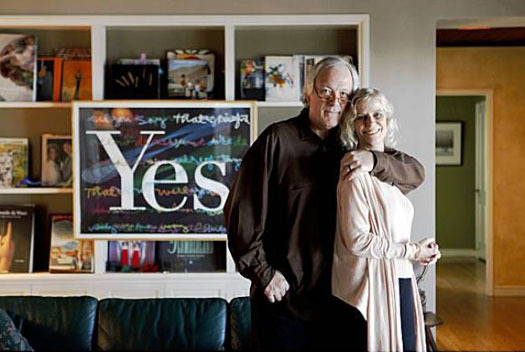 When we came to Michael and his wife and business partner Karin Hibma to design our logo, we were still called Team-Up for Youth and had no intention of changing our name. But Michael and Karin led the staff and Board through the process of defining the personality of our brand. In the end, we realized that we were Coaching Corps to the core.

It was in no small part thanks to Michael and Karin that we came to this game-changing realization.

Michael had created such well-known brands, logos, and names as Kindle, TiVo, and Good-Belly, just to name only a few that Wikipedia credits him with. He was very well known in the design field, and as a result could command a pretty penny for his work.

When we asked Michael and Karin to take us on as a client, we knew we could not pay anywhere near what their normal fee was. Several of us remember that day, sitting on their patio in the sun trying to convince him and Karin to take us on at a pro bono rate. They said they would because at that point in their lives they had decided they only wanted to work on things they knew had the potential to change the world. They were impressed by what we were trying to do, and the scale we wanted to do it at. They believed in us.

When we landed on the whistle as our new logo, Michael remarked that it symbolized an urgent call to action for everyone to end the disparities that kids in struggling communities face, and that the whistle in the hands of a Coaching Corps coach would have the power to do just that.

Our logo will always be extra special as one of Michael’s last that he designed. He was a good friend of mine. And he was a good man whose social justice inspired spirit will live on in the gift he gave us of our logo.

It has been a powerful symbol since the day it came into our lives. On January 1st of this year, it became even more so.

Thank you Michael. From all of us.