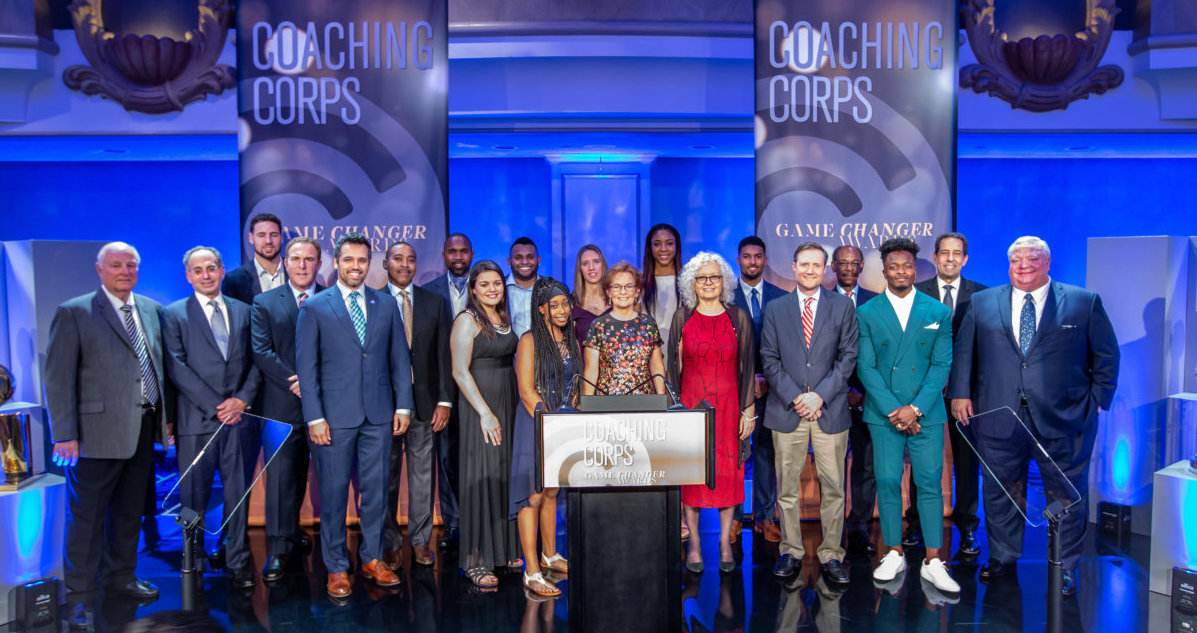 “He taught me what it means to sustain good character…He taught me what a healthy relationship looks like,” said Marquise Goodwin, wide receiver for the 49ers, about his high school football coach, Richard McCroan, at the 5th Annual Game Changer Awards in early January in San Francisco.

Professional Bay Area athletes gathered at Coaching Corps’ annual ceremony to honor special coaches who helped them reach their dreams. Klay Thompson of the Warriors honored his high school basketball coach, Jerry DeBusk, for laying his path to pro basketball. Pablo Sandoval of the SF Giants honored Bruce Bochy, whom he refers to as “Dad”, for having his back when others didn’t. Marcus Semien of the Oakland A’s recognized Ron Washington for turning him into a Gold Glove Finalist. Charles Woodson, Heisman Trophy Winner and Super Bowl Champion of the Oakland Raiders honored Vance Bedford for providing discipline and shaping his athleticism. And Kristine Anigwe, Cal basketball star, presented Cal Head Basketball coach, Lindsay Gottlieb, with the Coaching Corps Game Changer Award saying how Coach G taught her how to dream.

This year at the Awards, like in year’s past, Coaching Corps selected a Coaching Corps volunteer from across the country to receive the Coach of the Year Award for demonstrating exceptional dedication to the kids they coach. This year, the award went to Baltimore-based Benita Vargas Brown. Benita has spent the past two years coaching middle-school girls in volleyball at Hampstead Hill Academy in Baltimore. In that time, she has gone above and beyond the call of duty to ensure her girls make practice, improve their game, stay safe, and find their voices so they can go on to achieve whatever they set their minds to. One of her athletes, and a team captain, Londyn, flew across the country to present Benita with the award. As Londyn said when giving Benita the award, “Coach B., you are my coach of the year every year.”

In partnership with NBC Sports Bay Area and with the support of sponsors such as Levi’s, Blue Shield of California, and Xfinity, the Annual Coaching Corps’ Game Changer Awards puts everyday coaches front and center for having a tremendous impact on kids’ lives, particularly those living in low-income communities. Unlike their middle- and upper-income peers, kids in underserved neighborhoods don’t have the same access to sports, so they often miss a key ingredient to their growth – a sports mentor who can teach them important life skills like leadership, empathy, self-regulation and optimism.

Coaching Corps is grateful to the presenters, honorees and so many others for supporting this year’s Awards and shining a light on the importance of giving all kids, no matter their income or zip code, access to the caring sports mentors they want and deserve.