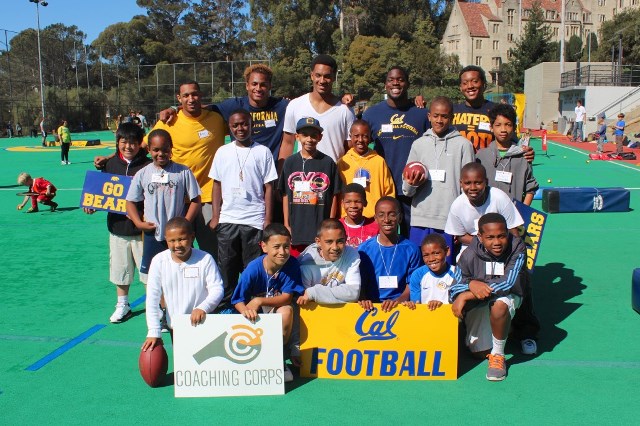 For the last five years, the Cal Berkeley Athletics Department and Coaching Corps have joined forces to bring the power of sports to kids across the Bay Area to introduce healthy living concepts, a wide range of sports and a college campus experience to young people from struggling communities.

On Sunday, October 14th, nearly 100 Bay Area K-8th graders played sports with athletes from Cal Berkeley sports teams. Participants took turns learning skills at 16 sports stations that included football, rugby, golf, track and field and more.  Kids had the opportunity to work one-on-one with the Cal Athletics volunteers on specific sports skills as well as speak to them about the journey from Little League to college sports life.

“I had fun at all the games.  The players were really nice. I think I want to be a runner now.” said Jadyn, a seven-year old participant from Oakland.

Participants came from various afterschool sports programs and schools, hailing from Berkeley, Oakland, Richmond, and Redwood City to this special event. Organizations who brought youth to the event include the Albany Berkeley Soccer Club, Bears Youth Basketball, Realm Charter School, the East Bay Soldiers, the YMCA in Berkeley and Oakland, and the Siena Youth Center.

Following the drills, youth participants toured UC Berkeley with a Coaching Corps coach and a college athlete. Along the tour, the college volunteers pointed out their favorite spots on campus, talked about the importance of working hard both on and off the court, and addressed potential barriers to getting to college and how to overcome them.

The tour concluded at the beautiful Haas Pavilion, where families and kids were treated to lunch and seats at the Cal Women’s Volleyball game.

“So many of these kids have never seen a college campus, let alone had the opportunity to play sports with athletes they look up to,” said Janet Carter, executive director of Coaching Corps.  “In struggling communities, chances to run in a field or park are few and far between which make days like this even more important. We are grateful to Cal Athletics for their support and the partnership that makes this happen every year.”