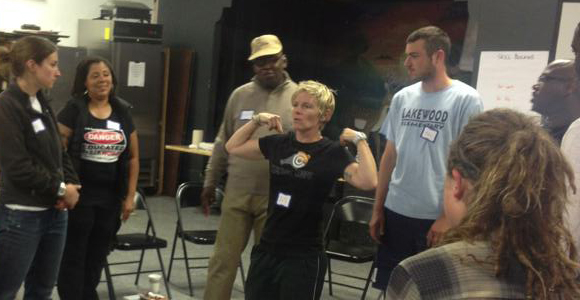 When talking to any Oakland resident about the city’s biggest problem, overwhelmingly you are likely to hear the word “crime”.  Coaching Corps believes that prevention can also be part of the solution and that is why they have teamed up with key community members to launch the first Coaching Corps Community Chapter.

According to the City of Oakland’s Shot Spotter Report, in just the first three months of 2013 – Oakland has had 21 homicides, 180 assaults with a deadly weapon and 1,054 gunshot calls to dispatch. And in 2012, Oakland homicide rates sky rocketed to 126 by the end of the year.

Janet Carter, executive director of Coaching Corps had this to say: “The most critical non-school hours for kids from under-served communities is between 3 and 6 PM.  Our organization’s focus is to give kids the opportunity for a safe and healthy outlet during those times with caring coaches who use sports to mentor young people so they can succeed on and off the field.”

Research has demonstrated that youth sports participation decreases delinquent behavior and other concerns such as gang participation, particularly in low-income communities. Additionally, it has been proven to increase positive outcomes like school attendance and high school graduation.
Historically located only on college campuses, Coaching Corps teams up with afterschool sports programs, schools and community based organizations to bring caring coaches and role models to young people who otherwise would not have the opportunity to receive the benefits of physical activity, playing on a team and learn important life skills like goal setting and perseverance.  Over 2,000 coaching volunteer coaches have changed the game for more than 20,000 young people living in underserved communities.

Shawn Granberry, an Oakland native and long-time activist, part of the Coaching Corps chapter at Cal-Berkeley and the fuel behind the development of the Coaching Corps Oakland Community Chapter says “We are embarking on a mission organize people from the community to serve as coaches and mentors … our goal is to go into poor communities like the ones many of us are from and create a positive change.” Shawn is also the co-director of Bears Youth Basketball, a Richmond based afterschool sports program that makes a difference by focusing on elevating academic performance and sports skills.

The Coaching Corps community chapter will operate similarly to the college chapter model in that it will:

“Our college student volunteers are essential to expanding the Coaching Corps movement so that we change the game for hundreds of thousands of kids and it is equally important that we are leaving capacity in the communities we serve so that young people have coaches and role models that understand where they are coming from and are people they can relate to,” continued Carter.

The research is clear.  Youth who participate in team sports with trained coaches have improved self-esteem, do better in school and live healthier lives into adulthood.  But the research is equally clear that participating in these opportunities depends largely on how much money you have.  Our recent national poll showed that while 64% of youth from high income families participated in organized sports, only 37% of youth from low income families participated.  As Oakland continues to struggle with crime, organizations like Coaching Corps can be key partners in saving the lives of Oakland youth.