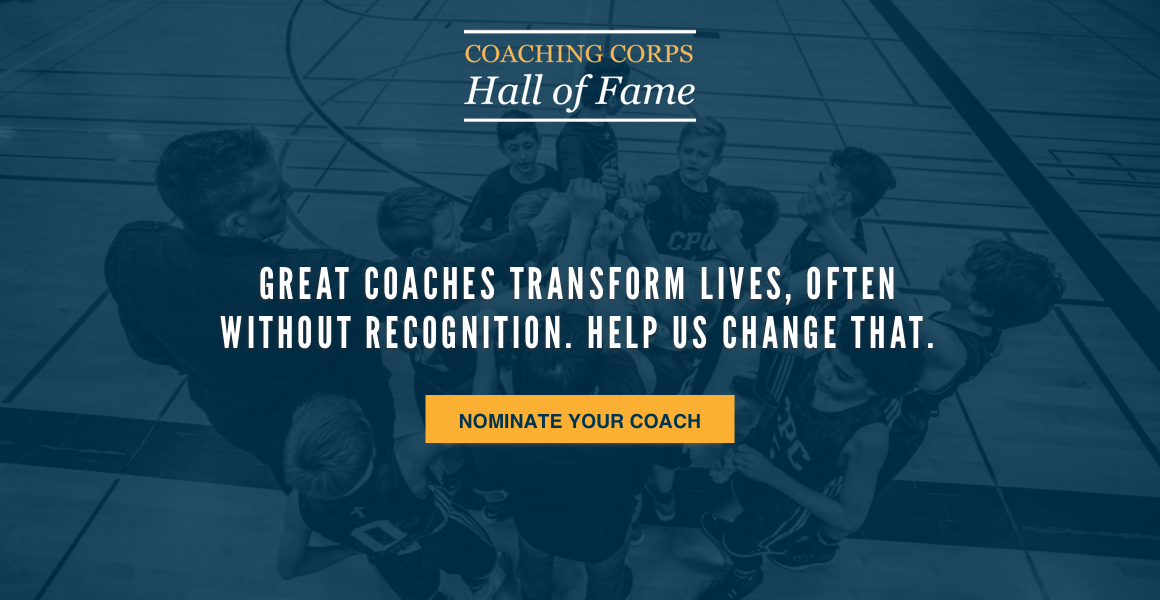 “There are many halls of fame that recognize professional coaches and athletes, but no real way to honor the unsung heroes who change kids’ lives every day,” said Janet Carter, president and CEO of Coaching Corps. “We’re giving people the means to celebrate their coaches’ impact while raising awareness about how youth in low-income communities do not have access to sports mentors the way their middle- and upper-income peers do.”

To increase a coach’s chance of being inducted, nominators need to build support among their communities for their coaches by sharing their coach’s page on Facebook, then encourage their network to like, share and comment on the page. The Coaching Corps Hall of Fame will rank coaches by a combination of likes, shares and comments. The top four coaches with the highest scores will be inducted into the inaugural Hall of Fame in April.

The Coaching Corps Hall of Fame will also invite nominators to raise funds for Coaching Corps. Each donation will go directly to supporting Coaching Corps volunteer coaches across the country to mentor young people through sports.

The Coaching Corps Hall of Fame was created to give people a way to honor sports mentors who played a significant role in their lives. Coaching Corps believes every child needs a caring mentor to realize their full potential. Unlike their middle- and upper-income peers, kids in low-income communities want to play sports, but often do not have access to a key ingredient – a qualified, trained coach – to fill that vital mentor role. Having a strong role model can have an outsized impact on kids facing the daily stresses of poverty. Coaching Corps designed the highest quality program to train, support and engage sports mentors across the country so children in low-income neighborhoods have access to sports mentors.

To learn more, visit the Coaching Corps Hall of Fame.

Since 2012, Coaching Corps has been fueling a movement of skilled coaches to give kids in underserved communities the sports mentors they want and deserve. By partnering with over 500 afterschool programs across the country, Coaching Corps has provided more than 150,000 underprivileged kids with the opportunity to play sports under the guidance of a caring, well-trained coach. Informed by the latest research on youth character development, Coaching Corps trains coaches to foster persistence, optimism, self-regulation and empathy in kids, providing coaches with the ongoing support they need to ensure girls and boys in under-resourced communities learn skills that last lifetimes. Based in Oakland, California, Coaching Corps is a 501(c)(3) organization. More information about Coaching Corps can be found at www.coachingcorps.org.