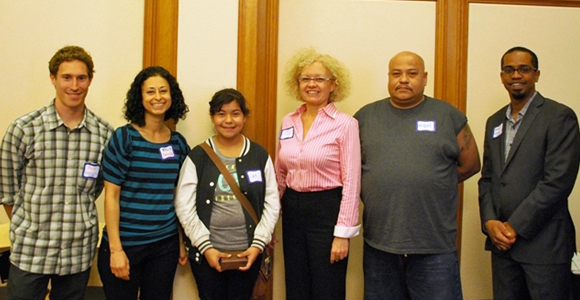 Coaching Corps’ partners are key players in our mission to eliminate social and gender disparities in organized afterschool sports. To honor these community heroes, on April 3rd, Coaching Corps held its very first Partner Appreciation Event for San Francisco organizations in and around the Peninsula. Over ten partner sites attended the event downtown at San Francisco City Hall.

In attendance was Spring Valley Elementary, Jean Parker Elementary (both are YMCA afterschool programs), SFUSD Excel, Girls on the Run, Immaculate Conception Academy, Salvation Army, US Soccer Foundation, Project Vega, BACR (Bay Area Community Resources), and PAL (Police Action League).  All of these organizations were recognized for their hard work and passion, as well as for their commitment to changing the game for kids in at-risk neighborhoods.

Two organizations received Coaching Corps’ highest award, the Golden Whistle. The Golden Whistle recognizes individuals who have made a positive impact on the health, educational, and social outcomes for kids living in struggling communities.

“Shannon knows the ecosystem of volunteer coordination better than most because she was a volunteer with Coaching Corps.  America SCORES has really benefited from her expertise and we know that Coaching Corps was the start of her career.”

The second Golden Whistle was given to Chris Santomauro, a program coordinator for the SF Girl’s League in the Tenderloin district.  Luzy Govea, a 13-year-old student who got her soccer start with a Coaching Corps coach in the America SCORES program, accepted the award on his behalf.  Chris played an instrumental role on creating a girls-only program at Redding Elementary, as well as organizing an all-girls league in the Tenderloin.

“When it comes to educating people about the power of sports within a youth development frame, Luzy and her family have done more toward that goal than most people could possibly imagine. They’ve inspired people across the country and taught us so much and Chris Santomauro was the catalyst that gave Luzy a chance to do so,” said Janet Carter, executive director of Coaching Corps.