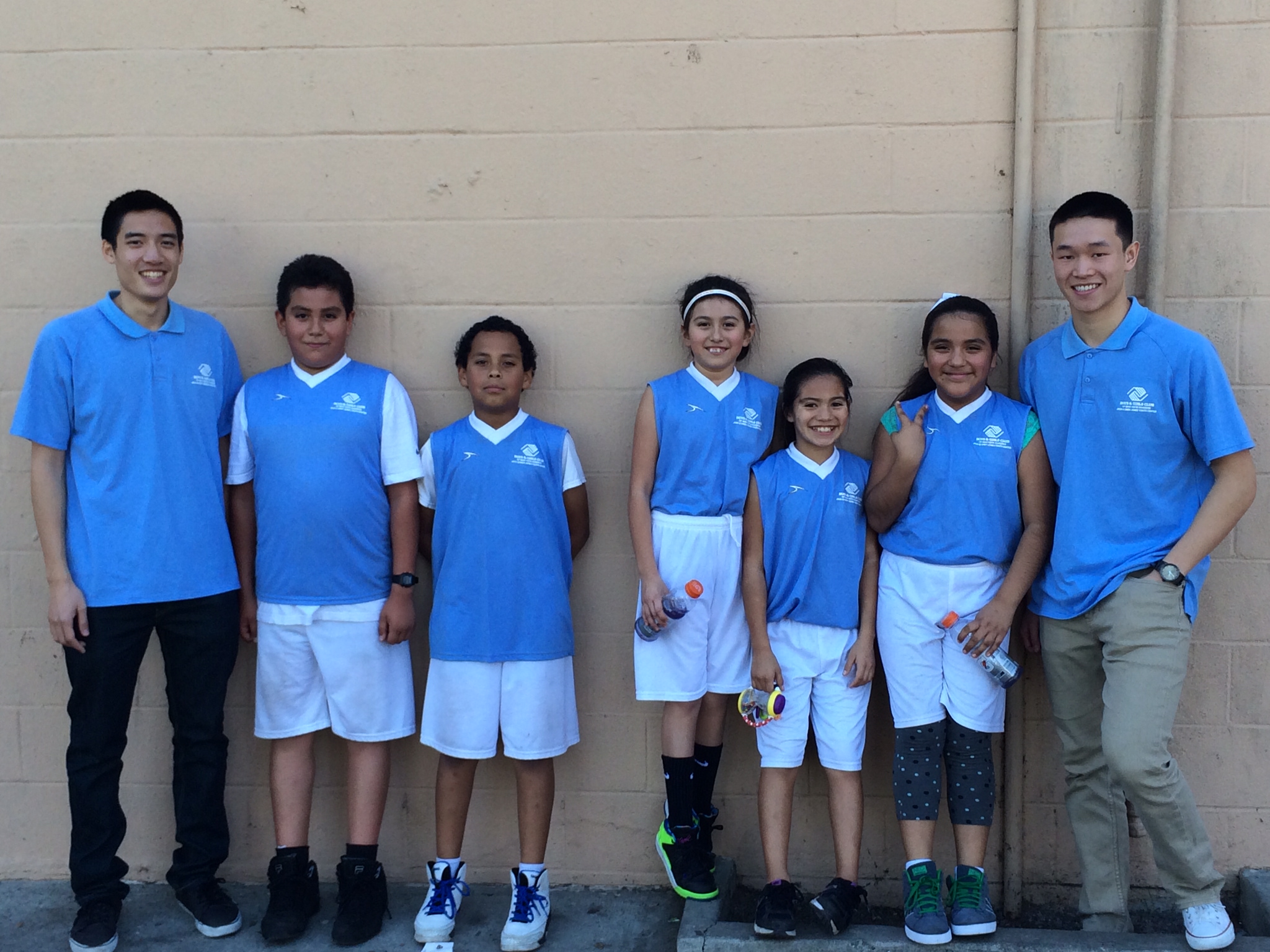 The whistle blows. Kids laugh as they race up and down the court. The sound of shoes screeching on the court is drowned out by the even louder sound of parents cheering for their kids. This is a normal Saturday for the Boys and Girls Club at Mara Vista Gardens. Their winter basketball league is a prime example of how programs can engage young people in the community, but also their parents.

There is another set of voices you will hear at the Saturday game days too.  Supporting each team are Coaching Corps coaches who are focused on developing these young athletes on – and off – the court. One coach in particular, Vincent Su, has made a lasting impression on this program and the youth.

Coach Vince, a first year at UCLA from Pomona, CA, is in his first season with Coaching Corps.  He is not new to coaching, or sports for that matter. Coach Vince grew up playing basketball and soccer, among many other sports. “Growing up, my parents always had me in sports and I always had fun,” he says.

Sports were a huge part of Coach Vince’s adolescence, “Sports were immensely important to me growing up, especially team sports,” said Coach Vince. “It is where I made my friends. I always hung out with my teammates and my coaches. It was a major part of my life.”

We caught up with Vince to talk about the impact sports had on his life, from the coaches that inspired him to the youth he now coaches.

Question: What is your major?

Vince: I am a biochemistry major.

Question: Is there a coach that you try to be like when you step onto the court with your kids?

Vince: That would be Coach Vinnie. He inspired me to be a coach.  Coach Vinnie pushed me to not just improve my basketball skills, but to move, work and win as a team. Most importantly though, I was taught to enjoy what I do. Coach Vinnie taught me to not just go through the motions. I have tried to hold on to these life lessons in my first year at UCLA.

Question: How did you hear about the Coaching Corps chapter?

Vince:  During Welcome Week, I came across the Coaching Corps UCLA chapter table at the Club Sports Fair. Like many new students, I was looking for a way to meet new people. The guy I talked to seemed cool, and the group seemed interesting. I had all these years being coached so why not coach myself?

Question: In this first season, what has coaching been like for you?

Vince: I began coaching my team in November and have worked hard to develop relationships with my team – feeding off their energy and pure love of the game. I love seeing the energy the kids have as they’re playing. It brings back memories.

Question: Do you have advice for other first year UCLA college students thinking of coaching?

Vince: My advice to first year coaches is to remember that the most important thing for kids is to enjoy the game. It’s not just about skills or running, but giving them a chance to just play.

Coach Vince is just one of many coaches that have joined the Coaching Corps movement in Los Angeles. We were able to pull aside Jesus Gonzalez, Athletic Director of the Boys and Girls Club of Mar Vista Gardens, to ask a few questions about Vince’s impact and of the impact of other Coaching Corps coaches on at his site.

Question: What impact has Vincent and other Coaching Corps coaches had on your site and its kids?

Jesus: Vincent and the other coaches have had a tremendous impact on our site, community, and kids. They have surpassed my expectations with their ability to coach and mentor our youth. Our Boys & Girls Club is located in a lower income housing development where the educational drop-out rate is above average. Coaching Corps coaches are great role models for our kids with both their knowledge of sports and education. Coaching Corps coaches have not only played a key role in the success of the program but also in the day-to-day success of our members.

Question: What makes Vincent a stand out coach?

Jesus: The first thing I remember when I met Vincent was his enthusiasm. He quickly learned his team members’ names which I noticed helped him gain their trust. He does a great job in passing down his basketball knowledge to the kids and shows great patience when his team members don’t get a drill the first time. Vincent mentioned that he bikes to our Boys & Girls Club from UCLA, a trip that takes 2 hours round trip. After hearing this I realized that his commitment to the kids and our club was immeasurable. Vincent has helped make our first basketball league a great success.

Question: What have the kids said about their experience thus far?

Jesus: The best way to answer this is to share the thoughts of the kids themselves.

“Vincent is one of the funnest coaches I have ever had.” – Alexandra Rodriguez, 10 years old.

Question: Have parents said anything about Vincent and other coaches? If so, what?

Jesus: Parents like how Coaching Corps coaches run practice. According to parents, their ability to inspire youth during practices and games has carried home.

With chapters at UCLA, USC and Cal State Northridge joining Coaching Corps’ national movement of service through sports, youth from all over the greater LA area are being supported by incredible Coaching Corps coaches. One of the major benefits of first years, like Coach Vincent is they have plenty of seasons to return and coach the same youth, building important relationships that extend beyond practices.