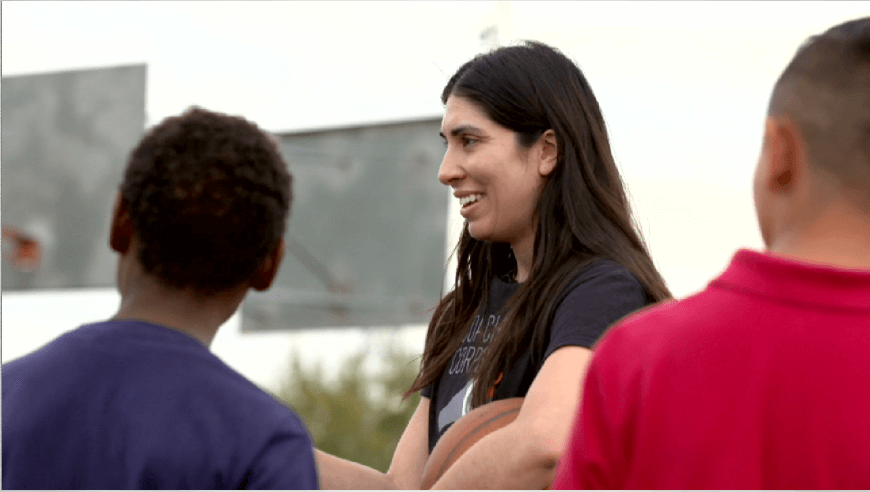 As a Graduate Student at Cal State Dominguez Hills, Annette Lopez already knew she wanted to be a coach, but for her, it was finding the opportunity to do so that was the challenge.

It all started with Annette’s father, who began to volunteer as a coach when she was younger. Annette played everything from basketball to volleyball, and along the way learned how to be a great teammate, keep a positive attitude, and develop social skills that lead to lasting friendships.

Throughout her life Annette stayed active, even joining Stanford’s rugby team in college. Positive coaches, like her rugby coach, Coach Griffin, reaffirmed how influential trained and caring coaches could be. However, it was not until attending Cal State Dominguez Hills a few years later that Annette discovered the opportunity to become a coach herself.

For Annette, signing up to become a coach with Coaching Corps was a serious commitment, as she knew how important positive role models were for children. Although it took her time to settle in to her first coaching position at Fedde Middle School, she soon grew comfortable with the group of students she coached. To her surprise, Annette quickly became a listening ear to the many challenges her students faced as middle school teens. “I know for most kids it takes time to open up, and [them] sharing parts of their personal lives was touching,” said Annette. “Although it wasn’t always about sports, as their coach they had access to me.”

In particular, Annette befriended a transfer student from China named Joyce at her second location, Ross Middle School. Although they said very little, they “spoke the language of basketball” and Annette would keep her company. As the weeks went on, Annette saw Joyce become more comfortable with her and her classmates. On Joyce’s last day at Ross Middle, Annette witnessed how their time together made a difference. Joyce happily played basketball with the students she once shied away from!

For Annette, moments like these inspired her to coach in the first place. “Middle school is a time when kids are growing and need a role mode in their life; sports is a great way to provide kids with that,” said Annette. Having a variety of kids with varying degrees of interest in sports, Annette has continued to learn and grow as a mentor. Now promoted to a Coaching Corps Team Captain, Annette hopes to help recruit coaches looking to make a difference!

On January 27th Coaching Corps held the 2017 Game Changer Awards to celebrate the life changing impact of coaches and mentors, both on and off the field. Bay Area professional athletes George Kontos (San Francisco Giants), Draymond Green (Golden State Warriors), Kendall Graveman (Oakland Athletics), NaVorro Bowman (San Francisco 49ers) and Oakland Raiders Head Coach Jack Del Rio reflected upon the mentors who shaped their lives. Annette was honored as the 2017 Coach of the Year for her service to the community and dedication to changing the game for kids. Her story was also featured in the San Jose Mercury News.

To join Coaching Corps and make a difference like Annette – sign up to become a coach today!