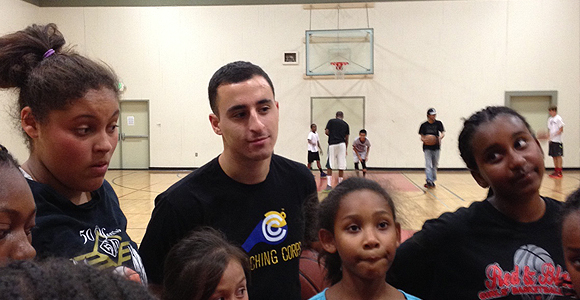 Coach Harrison is a third-year student at the University of California – Berkeley.  As an economics major, Harrison is familiar with concepts such as “elasticity” and “deflation”.  But a concept that drove him to sign up for Coaching Corps was “disparity”.

“Sports played a significant role in my childhood.  It created best friendships, trust, and camaraderie.  The kids I coach are a representation of the community as a whole.  Good, smart, and genuine kids.  I wanted to give them the same opportunities I had at their age.”

As a youth, Coach Harrison played a variety of sports ranging from t-ball to soccer to swimming.  His reason for being so active: “Playing organized sports was a way for me to solidify relationships with friends and teammates.  We were on the same teams and went to the same school together.”  An avid football fan,  Harrison was determined to make his high school team as a freshman.  And his height difference when compared to the rest of the team created a little self-doubt about how effective he would be on the field.  It was his football coach that stepped in and alleviated this doubt when he told  Harrison and his teammates that they could win his respect through the effort they put in, regardless of the results.  It was always about giving 100% and not necessarily about making the big play.

Hearing this was a life altering moment in Coach Harrison’s life.  “I ended up making the Varsity team my junior year as a wide receiver, and I attribute a lot of that to my coach giving me words of encouragement for the effort I put forth.  It made a lasting impression on me.”

Inspired by his childhood coaches and determined to make that same impact, Coach Harrison joined Coaching Corps in the fall of 2012 as a volunteer coach.  His first season was spent at East Bay Soldiers: a youth basketball organization dedicated to serving kids in the struggling communities of El Sobrante, California.

Within the first few practices, Harrison began to realize the importance of his work, “The program impacts the kids and the parents not just within the context of basketball, but by keeping the kids away from dangerous and unproductive activities.”

And the results are quantifiable.  The East Bay Soldiers frequently attend out-of-state basketball tournaments, like the President’s Day Jam basketball tournament in Reno, Nevada, and are bringing home trophies and championship medals en masse.  Even people who the boys and girls meet along the way are impressed: tournament referees and scorekeepers request East Bay Soldiers games, while flight attendants and bus drivers frequently comment on the respectfulness of the young players.

Coach Harrison insists that his contributions to these successes are limited, but East Bay Soldiers Head Coach Sef Sunia says otherwise, “We encourage volunteer coaches, but we’re guarded about our kids.  Our kids are our kids, so we’re very protective.  That’s why we trust Coaching Corps coaches, like Coach Harrison, because they send us great people who are helpful and trained.  I hope he stays with us for a long time.”