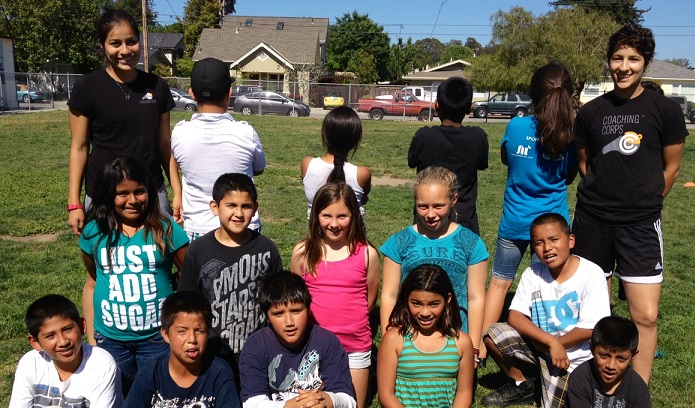 “I felt an instant connection to Coaching Corps, because the people they try to reach are just like me when I was younger,” says 22-year-old Andrea “Dré” Quinones-Rivera (back, far right in the photo above).

Growing up in the Bay Area, Dré loved playing soccer, but it wasn’t always easy for her family to secure the training she needed to stay competitive. “My parents couldn’t afford the fees,” she remembers.

Dré knows firsthand the difference sports and good coaches made for her on the soccer field and in the classroom. She credits Coach Suzanne, who is also Coaching Corps’ manager of training and education, with teaching her to be confident and work hard, on and off the field. In fact, she says, it was because of her coach that she pursued college – and now will be enrolling in medical school at the University of California, San Francisco.

Her love of sports, coaching and Coaching Corps’ mission all came together a few years later. Coaching Corps had just started building a network of chapters at colleges and universities to help recruit coaches to support Coaching Corps’ after-school partners in local communities.  Dré was excited to launch a chapter at the University of California, Santa Cruz, where she was a senior studying molecular biology.

“It was challenging, but it was fun, too,” she says of becoming the founder and president of the chapter, where she helped recruit and manage three dozen coaches in its first year. “A lot of the coaches hadn’t coached before and it was awesome seeing them become more comfortable and connect with the kids. And because I feel passionate about Coaching Corps and what we’re doing for kids, it was easy to spread the word around campus.”

When she graduated last spring, she passed on the role of president, but she still checks in to see how the budding chapter is doing. “I just talked to the president last week and it’s going really well,” she says. “They are now coaching 450 kids a year.”

Today, Dré says she misses Coaching Corps and coaching, but it feels good to have started something so positive – and to know that it is continuing to grow. “Sports have done so much for me in terms of my development and my confidence,” she says. “I’m so glad to have a chance to pass that on.”

Coaching Corps coaches have worked with over 35,000 young people, giving them the chance to experience the special relationship that comes from playing on a team with a caring adult.