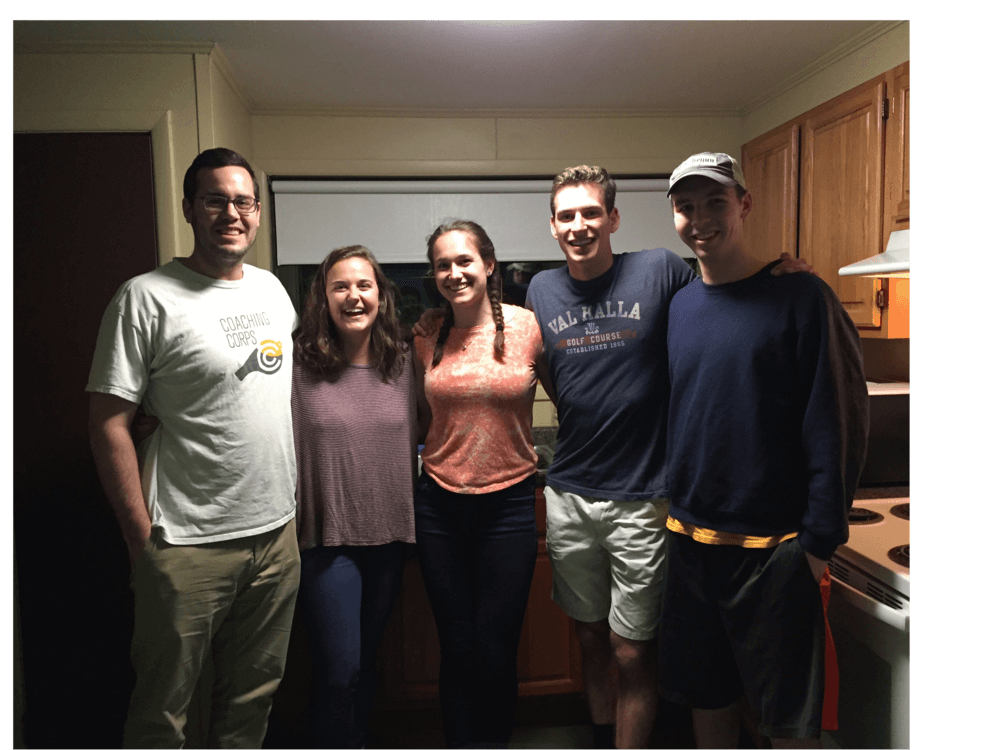 Four years ago while a Junior at Boston College, Will Relle wanted to make a difference. He was inspired by the Coaching Corps mission of bringing role models in the form of coaches to kids in low-income communities in California, and knew there was a need for the same kind of mentors around Boston. So he set out to start a Coaching Corps chapter at Boston College and committed his college days to bringing volunteer coaches to Boston’s underserved youth.

The experience left an indelible mark on Will, and once he graduated, he craved for a way to continue his work with Coaching Corps. Will thought he must not be alone.  There must be many Coaching Corps alumni who would want to stay involved in the Boston area.  That’s when he set out to establish the Boston Alumni Chapter of Coaching Corps, the first of its kind.

With several other fellow Coaching Corps alums, Will is working to bring together former Coaching Corps coaches who want to continue to make a difference.

“We all had this great experience coaching kids with Coaching Corps, and an interest in volunteering, and I want to figure out how we can continue that after we graduate,” says Will.

Boston College Team Captain Piper Haney joined Will in rallying former Coaching Corps coaches. Together, they recently hosted the chapter’s first meeting, where they brainstormed ways to stay involved in service. After some discussion, the first planned event took shape. On Saturday, September 15th twenty-five Coaching Corps alumni will volunteer at Fenway Park as part of the Red Sox “Green Team” to collect recyclable material during the game.

Will is excited about the opportunity to bring Coaching Corps alumni together and anticipates this will be the first of many networking and service events that support Coaching Corps’ mission to provide Boston’s children with a trained and caring coach..

All Dorchester Sports and Leadership

After School All Stars: Los Angeles

Boys and Girls Clubs of the LA Harbor

Girls on the Run of Los Angeles

Going Above and Beyond the Call of Duty

Benita Vargas-Brown grew up in one of the poorest parts of Baltimore. She always wanted to make a difference in the city, which is why she became a social worker. That same passion eventually led her to coach and mentor kids in sports. Learn more about Benita’s journey in her own words.

How did you become a Coaching Corps coach?

I didn’t go looking for coaching, it found me. I was really stressed with my job and my final semester in undergrad, so my husband said, “You’re really not helping yourself. Why don’t you leave your job, take the semester off, and figure out what you want to do next?” So, I went to a volunteering fair, and that’s when I got to know Coaching Corps. It was destiny: They were looking for a volleyball coach, and I am qualified to coach volleyball. They said they needed a coach for Hampstead Hill Academy, which is literally just a walk away from our home. So, it was really perfect.

Can you tell us more about the challenges that the kids you coach face at school and at home?

When people hear Baltimore, crime and violence are among the usual challenges that come to mind, so it was extra important to keep the kids off the streets. I’ve had to drive some of the girls home so they don’t have to take the bus when it’s dark.
There have also been some differences among the girls. The school is located at Patterson Park, where on one side you have the million-dollar houses, and on the other you have boarded-up houses. So you wind up having kids coming from privileged and underprivileged situations. This created some interesting dynamics within the team that led to some difficult conversations, but we got through it eventually. That’s one of the benefits of team sports. We got this whole learning experience that wound up really positive at the end.

You mentioned something about “interesting team dynamics.” Can you share more about that?

This is actually one of the things I’m proudest [of] about my team. The girls take it upon themselves to address differences within the group. At one point, it became very clear during our practice that something wasn’t right. We were on this championship drive but there was obvious tension within the team. The girls came to me and gathered as a group to talk things through. The fact that they came up with that strategy on their own is really amazing. For me, it meant that we’re doing something right. After that talk, we got back together as a team. I’m so glad we did it because I know for a fact we wouldn’t have won the championship without sorting things out. Everybody makes mistakes. At the end of the day, what’s important is to be there and have each other’s backs.

What changes or improvements did you see in the girls as a result of being on the team?

The most obvious one would be the sense of maturity. To be in a position where you have a responsibility over something, to be able to practice and play, there are expectations. If you didn’t come to practice on Wednesday, you’re not going to play on Thursday: that’s the consequence for skipping practice.  Eventually it wasn’t the consequence that really drove them. It was their commitment.
All my [Coaching Corps] girls who tried out for high school sports made their teams. There are two highly-rated schools in Baltimore, Baltimore Polytechnic institute and Baltimore City College. To get into those schools is every parent’s and kid’s dream. They have great education and high graduation rates, and they don’t tolerate gang-related violence, which creates a safer environment for the kids. Fifteen of the girls from the team got in and played for Poly while 13 went to City. That makes me really happy.

Wow! If there’s one way to describe success and promoting equity, that would be it. With all these experiences, what advice would you give aspiring coaches and mentors for kids?

Show up. You have to be there. You have to be consistent. You can’t cancel on these kids. Over the course of my time, if I know something’s going to come up in my schedule, I plan for an assistant coach to take over. Kids know if you care. You can figure out everything else, there are Youtube videos for that. You just have to show up because these kids expect you to be there for them.
Back to Annual Report