2019 is off to a great start. Last week, I nominated my former Little League coach, Steve Knott, for the first-ever Coaching Corps Hall of Fame. I’m excited Coaching Corps created the Hall of Fame so people like me can honor a sports coach who has impacted them in a positive way. Coach Knott is that person in my life.

I was born and raised in San Lorenzo, California. I’d argue that I was part of the last generation to play outside, and I took full advantage – from sunrise to sunset. Sure, I would engage in my Nintendo 64 and PlayStation, but only after a full day of outside play. Encouraged by my older brother to get outside, I hung out with him and the older, bigger kids on the block. It made me tough, fierce, competitive and strong. Those early experiences helped me find my true calling in sports.

I was relentless. I didn’t stop. If I didn’t have anyone to play with, I’d shoot hoops on my own. I’d visualize myself as Jason Kidd—the former pro basketball player and head coach of the Milwaukee Bucks—dribbling back and forth, dashing underneath the hoop for a layup off the glass. Every night my mom would shout, “Dinner’s ready!” I appreciated her persistence because she would have to say that line multiple times. 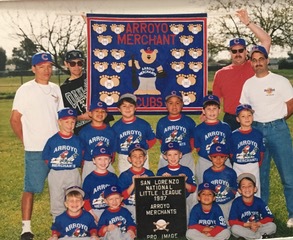 Despite playing basketball at home every day, I fell in love with the game of baseball. I was fortunate to have played Little League baseball for the Cubs, Indians, Reds and Pirates. I was led and coached by Steve Knott on three of those teams at the ages of five, seven, 10 and 11. He watched me grow. More importantly, he helped me grow.

When I was a child, I grew up with a hearing problem. I didn’t utter a word until I was three. After many trips to the doctor’s office, the problem was solved. But I had to catch up on my speech and communication. It was challenging to interact with my peers, even my own mother.

Baseball is a game that requires constant communication. The game opened doors for me. Coach Knott gave me the inspiration to be confident and proud of myself. I felt alive on the baseball field. Coach Knott gave me structure, hope, and an opportunity to find myself through baseball. He relieved my anxiety about my speech challenges, and got me to talk on the field! He was everything a kid could hope for in a coach—caring and selfless.

Coach Knott decided to coach because his son was playing baseball. As a coach and a dad, his love for the game and family was easy to spot. In fact, his wife Christine was the team mom. She brought snacks and drinks for the players after each game. It was community building at its finest.

Coach Knott is my Game Changer.