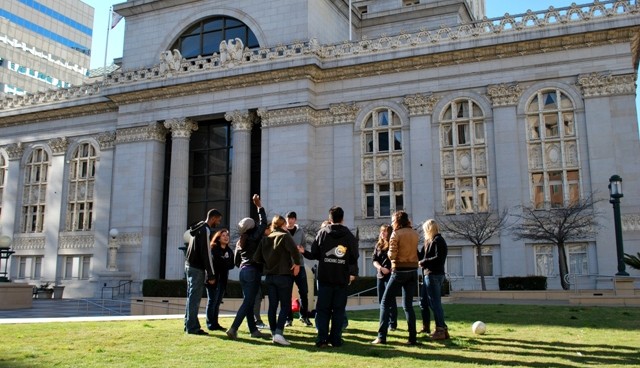 Yesterday in Oakland a child learned how to shoot a basketball. Today a child in Orlando, who was afraid of the ball only last week, is passing a soccer ball to her teammates. These seemingly small moments are occurring daily. Behind these moments is a movement led by coaches from different walks of life, who are creating memories and building skills that will last a lifetime. Coaching Corps, and the coaches who are the backbone of this organization, is serving kids who might never have access to these moments and these memories.

As with all teams, an organization and a mission are only as good as those who put in the hard work to help it run. Our Coaching Corps chapter leaders, many of whom juggle full class schedules, jobs, and coaching, are vital to helping us serve the kids who need us. They recruit and support (and often a million little things in between) our campus chapters and the coaches who populate them.

Every year, we like to recognize our coaches and the leaders who make our movement possible. Your hard work is invaluable in our mission to close the sports gap and change the game for more kids across the country. This year’s Chapter Award winners are: 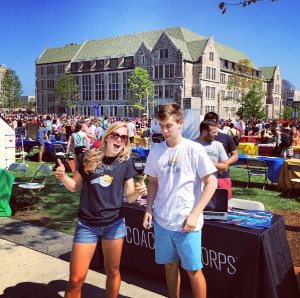 This year, the winner of the Coaching Corps Chapter of the Year award goes to Boston College—a chapter that has battled blizzards, braved snowstorms, and still rallied together to create a chapter that not only met, but consistently exceeded its goals.

The Coaching Corps Chapter at Boston College had an amazing year! Out of 270 clubs on campus, this Coaching Corps Chapter was named one of 40 to have an A+ rating that led to hundreds of potential coaches expressing interest at their activities fairs. Chapter leadership’s strategy to lead potential coaches through the application process during general meetings proved successful—they received over 60 new applications from the fall meeting alone.

Boston College’s Coaching Corps Chapter was able to fill nearly 70% of their partners’ needs this year. By leveraging Boston College funding, chapter leadership was also able to improve coach quality by providing basic equipment such as whistles, clipboards and cones for coaches who needed them. They also have the new leadership team already organizing their Coach Appreciation Event.

The tremendous effort and teamwork that went into strengthening their chapter, improving coach quality, and serving their community lands Boston College as Chapter of the Year. Boston College has proven that with a dedicated team, strategic planning, and consistent support, a chapter can produce results while supporting coaches. “We feel that with a solid foundation of new, young, coaches, we are able to look forward to organizing events on campus an in the community that will help support our efforts in narrowing the sports gap.” 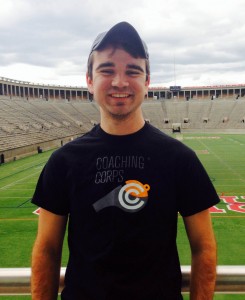 With Coaching Corps and his regional contact in California, Andy took the initiative to work closely with partners. By coaching two teams at once, Andy strengthened and grew partnerships with new organizations. At the team level, Andy exemplified what it means to be a coach—working with his teams and understanding their needs on an individual level and what their goals were for the future. Andy helps the teams he coaches thrive by encouraging them to get to know each other beyond practice. He also worked with the Boys and Girls Club to develop a curriculum that folded in the importance of education and with sports, even using basketball stats like free throw percentages to teach them fractions!
Andrew Reardon displayed the tenants of what it means to be a Coaching Corps Ambassador. Andy’s passion for the mission Coaching Corps is an inspiration, and we cannot wait to see what he and the rest of the Harvard Chapter have in store for us next year!

The Rookie Chapter of the Year: University of Central Florida

Over 2,000 miles away from Coaching Corps headquarters in Oakland, in sunny Florida, a new chapter was developed and grown by the hardworking team at University of Central Florida. Although far away and brand new to campus, this dedicated team stepped up to the plate and recruited and supported coaches to serve the needs of kids throughout Orlando.
The chapter kept its members engaged by hosting several Coach Huddles throughout the year, appreciating and informing them of coaching opportunities and recruiting new coaches. They interfaced with the university itself, becoming a Registered Student Organization in the fall and helping coaches post their service hours online for scholarships and grants.
UCF also partnered with Orlando After School All Stars, the Sports and Exercise Club on campus, and Orlando City Soccer (a major league soccer team in Orlando) for guidance and support. With a strong first year of tabling, advertising, and coach support the team at UCF has paved the way for many more seasons of greatness. Great job UCF!

In order to keep our mission of serving kids thriving, chapters must reach out and engage them beyond the court. This year, UCLA is the winner of the Community Engagement Award for doing just that!

UCLA’s annual Take Your Team to College Day was an amazing experience, bringing over fifty elementary school students to UCLA, showing them the beautiful campus and giving them a glimpse into the life of a college student. The event, which included a scavenger hunt and a tour of the athletic Hall of Fame, helped to inspire the students to look at all the opportunities that await them. They also led a discussion with their Division I athletes on campus and a discussion about their possible academic futures. By engaging with the kids, they are planting the seeds of a life rooted in the importance of education. Great job showing how events like these can inspire those that we serve, UCLA!

The Coach Retention Award goes to: University of California, Berkeley
Every team needs its veteran players, people who are experienced and excited about our mission to close the sports gap for low income youth. Returning coaches provide consistency for the kids we work with and raise the quality of their teams. That is why UC Berkeley is the winner of the Coach Retention Award! They are one of our oldest chapters, providing unique events and outreach to keep coaches coming back and proving that they are adaptive and creative at finding new ways to reach coaches. With 12 returning coaches this year and an ever growing number of coaches, we cannot wait to see what they have in store for next year!

The Coach Recruitment Award goes to: San Diego State University
Bringing in new coaches not only grows Coaching Corps chapters, but it also grows the number of kids who get the opportunity to grow emotionally and physically as they play sports. With an impressive 29 new coaches and growth that will only rise, we are so proud to award SDSU with the Coach Recruitment Award! With a strong leadership team at the helm, consistent tabling, and targeted recruitment, SDSU has been able to turn out impressive Expressed Interest and coach numbers. Way to go SDSU!